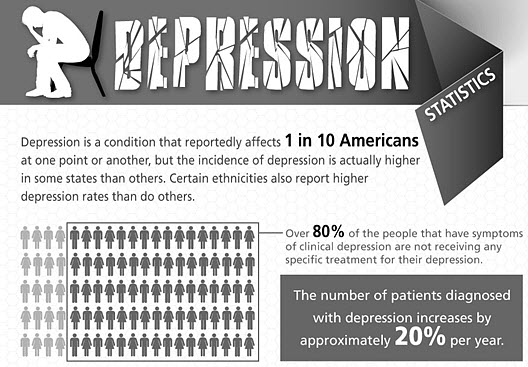 Did you know that:

1. Depression affects approximately 14.8 million American adults, or about 6.7 percent of the U.S. population age 18 and older, in a given year. (Archives of General Psychiatry, 2005 Jun; 62(6): 617-27)
2. Depression can develop at any age. (U.S. Census Bureau Population Estimates by Demographic Characteristics, 2005)
3. Depression is more prevalent in women than in men. (Journal of the American Medical Association, 2003; Jun 18; 289(23): 3095-105)
4. As many as one in 33 children and one in eight adolescents have clinical depression. (Center for Mental Health Services, U.S. Dept. of Health and Human Services, 1996)
5. People with depression are four times as likely to develop a heart attack than those without a history of the illness.  (National Institute of Mental Health, 1998)
6. The number of people diagnosed with depression has increased significantly – by 20% every year

But did you also know that there is mounting evidence in scientific research linking exposure to mold and depression?

Most people associate wheezing, shortness of breath, stuffy nose, cough, headaches, skin, throat, lung infections and eye irritations with exposure to mold.
But the research is compelling: severe inflammatory response after exposure to molds can trigger depression in mold sensitized individuals.[/vc_column_text][/vc_column][/vc_row][vc_row][vc_column][vc_column_text]In the most recent study, published in JAMA Psychiatry, the researchers found that people with clinical depression had a 30 percent increase in brain inflammation, also referred to as neuroinflammation. It’s uncertain whether the inflammation caused the depression or vice versa, or if it’s simply a correlation. But the study makes it clear that the link should be further examined.
“This finding provides the most compelling evidence to date of brain inflammation during a major depressive episode,” Dr. Jeffrey Meyer of CAMH’s Campbell Family Mental Health Research Institute said in the press release. “Previous studies have looked at markers of inflammation in blood, but this is the first definitive evidence found in the brain.  Depression is a complex illness and we know that it takes more than one biological change to tip someone into an episode,” Meyer said in the press release. “But we now believe that inflammation in the brain is one of these changes that’s an important step forward.”

The problem is, unless you know to look for it, probably most people don’t associate diverse physical and psychological symptoms of depression to mold exposure.

But, a serious mold problem — easily evidenced by either the smell of a musty odor or the sighting of slimy, furry and discolored patches on walls or ceilings — can develop and fester after excessive and continuous water damage.
Most often molds found in the home or in the workplace are caused by some type of water damage or brought in from the outside to grow and flourish.
Indoor flooding, leaking pipes or windows, and leaking roofs all are common causes of indoor mold.
Up to 40% of homes in the U.S. have experienced water damage at some point in their history.
The mold found in many homes across the country is microscopic fungi that grow on any host surface. Although mold prefers to grow and even thrives on certain surfaces like paper, cloth, wood, etc, it can grow just about anywhere if the conditions are right. This means mold could even grow on concrete or glass – if it’s dirty or covered with organic material that can feed the mold.
Molds are survivors and very adaptable, easily able to not just survive but thrive in many home environments.
And  25-28% of the general population are “mold sensitized individuals” – that is, they have a genetic predisposition to mold sensitivity.
The link between mold and depression starts with mycotoxins.
Mycotoxins are known to cause allergic and other adverse health reactions through an  increased systemic inflammatory condition in animal species.
But here’s the thing: Despite the growing scientific evidence, the U.S. government has not established general guidelines for acceptable levels of residential or workplace mold. Even though the research evidence continues to mount, it has not recognized conclusively that exposure to mold is linked to mental or other health problems for 25% of the population with mold sensitivity.
If you suspect that you have a sensitivity to mold, or you have experienced depression that did not respond to standard treatment, be proactive! Get your home and workplace tested.
It may be the mold you can’t see that’s causing the problem!

If you have experienced depression that has not been helped by standard treatment, it’s time to get your work and home environments tested for mold!

PuroClean Emergency Recovery Services does mold remediation and removal, not mold testing. If you need a referral to a mold testing company give us a call at 877-750-7876
[/vc_column_text][/vc_column][/vc_row]

Not All Mold Can Be Prevented: The Case of Condominium Bathroom Mold