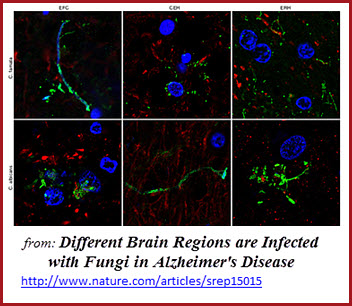 In previous blog posts we discussed the relationship between mold and asthma, mold and chronic fatigue syndrome and mold and depression.

For anyone with a family member diagnosed with the disease, you know that Alzheimer’s Disease is a heartbreaking, progressive, degenerative disorder. And you’ve probably watched the progression of memory loss and the disorientation of dementia that accompanies the diagnosis.

From previous research, we know that the brains of people diagnosed with Alzheimer’s Disease have amyloid plaques and tangles among brain cells. The plaques and tangles cause brain cell death, clogged blood vessels, and inflammation. But, while there have been many theories, until recently, no one has been able to identify what causes the damage.

By using DNA sequencing, the research team found several fungal species in the brain samples of deceased Alzheimer’s patients that were not present in the brain tissues of non-Alzheimer controls.

Then, in 2015,  the same team published a second research investigation examining the Mold-Alzheimer’s disease relationship. They published

“Direct Visualization of Fungal Infection in Brains from Patients with Alzheimer’s Disease.”

The findings from this research provided an explanation for the “hitherto elusive detection of fungi in brains of people with Alzheimer’s Disease.”

As scary as this idea sounds, even scarier are the researchers’ findings that “fungal cells are actually internalized inside neurons.”

What that means is that mold somehow found its way into the brain cells of people diagnosed with Alzheimer’s Disease.

Then, in September of 2015, the research team published a third report of their findings in “Different Brain Regions are Infected with Fungi in Alzheimer’s Disease.“

So what were the areas of the brain infected with fungi?
“The regions examined were external frontal cortex (EFC), cerebellar hemisphere (CEH), entorhinal cortex/hippocampus (ERH) and choroid plexus (CP).”

And what were the different species of fungi found in the brain tissue of deceased Alzheimer’s patients?

Cladosporium is one of the most common indoor and outdoor molds.

So who cares? And why does this matter? 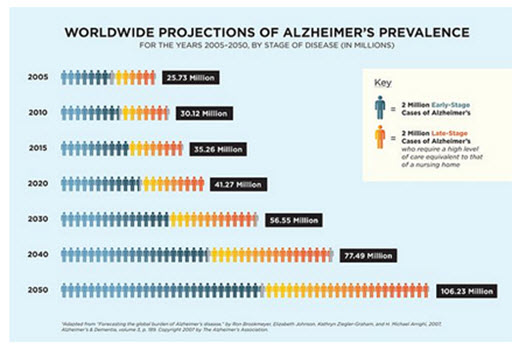 According to the UCLA biostatistics team in “Sounding the alarm on a future epidemic: Alzheimer’s disease“

Through a systematic review of Alzheimer’s studies, the UCLA team found that the rate of being diagnosed with the disease doubles every five years in older populations.

“The projected increase in Alzheimer’s cases represents a huge public health problem when you think about the costs associated with caring for a person with the disease, along with the emotional burden for family members.”

Alzheimer’s takes a devastating toll– not just on those with the disease, but on entire families.
Currently, there are more than 5 million people in the United States diagnosed with the disease. And, Alzheimer’s Disease is the 6th leading cause of death in the United States. It kills more people than breast and prostate cancer combined. And the cost of caring for all those patients? In 2016 it exceeded $236 billion dollars!
Yes. You read that right. That’s Billion with a B!
Nearly half of caregivers of someone with Alzheimer’s contribute financially to their care.
Often caregivers cut back on their own expenses (including food, transportation and medical care) to pay for dementia-related care of a family member or friend.
In addition, care contributors are 28 percent more likely than other adults to eat less or go hungry because they can’t afford  to pay for food.

Yet, what if the impending “Alzheimer’s Epidemic” could be prevented?

In light of the current research linking mold and Alzheimer’s Disease,

Mold can’t grow without water and an organic source of nutrients. So, whether you find mold in your attic, your basement, your kitchen, or bathroom, moisture from some source is always involved.

Call us immediately at 877-750-7876 to get an inspection as soon as possible. The longer you wait, the more likely exposure to mold can cause problems for you and your loved ones.