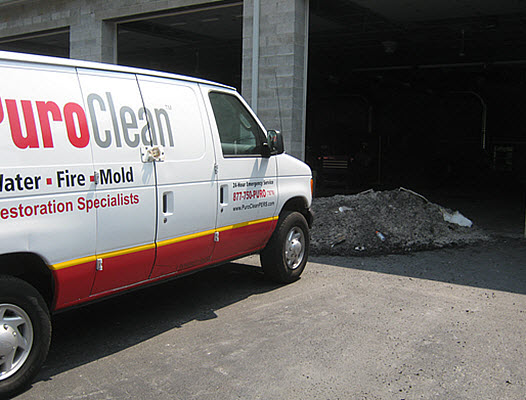 Commercial Fire Damage Restoration is covered under your property and casualty insurance policy.

But don’t let your natural optimism keep you from getting the right amount of coverage!

I’m an optimist. No, really, I am. And, I bet you are too. Don’t believe me?
Let me explain:
When you got up this morning to take your shower you believed the water was going to be there and be hot, right? You turned on the coffee maker and expected that within minutes you would have a nice hot cup of Joe, right? When you got in your car and turned the key, you anticipated that it would start.
Then when it did, you probably didn’t think twice about all the other drivers as you pulled out of your driveway. You just assumed they would all follow the rules of the road. Right?
In my book, that means you’re an optimist.
Optimism is part of our human make up. I think we’re “hard-wired” for it. And, we make choices every day based on this assumption of optimism – that things will work, that life in general will be all right, and that all the other motorists on the road will be following the same rules that we do. And this is a good thing. To do anything else sort of paralyzes us and gets in the way of living.

The only problem is, things do go wrong.
Water heaters burst – usually in the middle of the night or when we’re away on vacation.
Toilets do over-flow – especially when a three year old tries to flush a rubber ducky so it can swim with the “brown fishies.”
Washing machine lines and ice maker lines break – most often when homeowners are at work. Coffee pots and toasters do burn and catch fire. And car accidents happen, as the Allstate “Mayhem” character likes to remind us.

Our logical mind knows this. But really, how many of us are “in” our logical minds all the time?
Usually, nobody plans for a disaster.
Our inherent optimism allows us to assume a certain amount of risk in daily living.

So now you might be asking “But why is this important?” 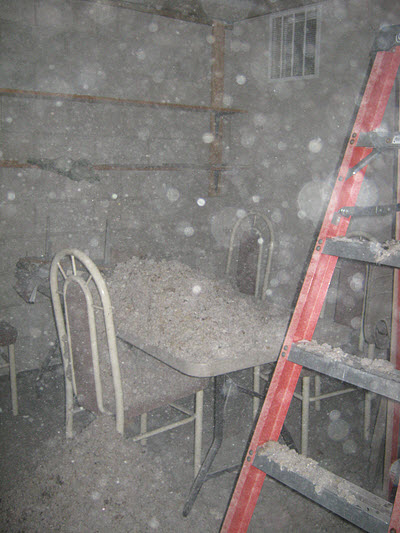 When this business owner in Mt. Holly NJ needed fire damage restoration in his commercial building he called us! 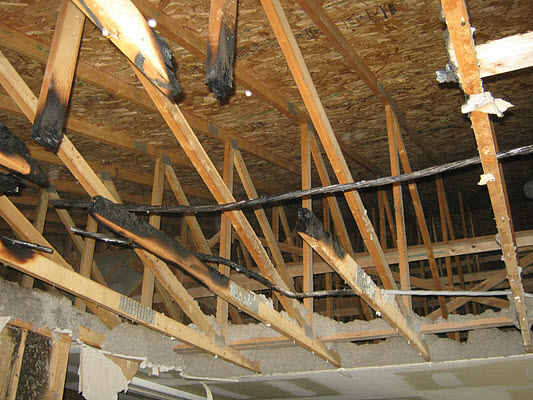 The ceiling wire that started the fire in this commercial building in Mt. Holly NJ 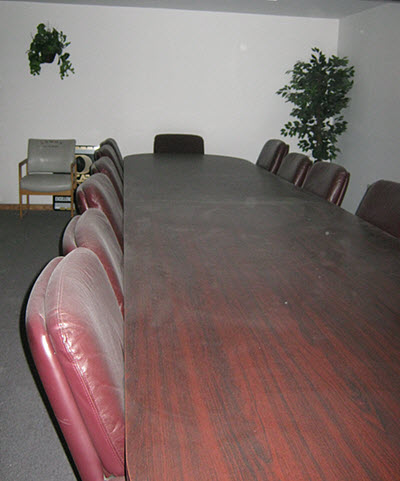 A short time ago, we were called out to a huge commercial fire damage restoration job for a building in the Mt. Holly, New Jersey area.
The owner, an enterprising business man, had purchased his original building over 18 years ago.
In the course of the last 10 years, he had more than tripled the size of his business by constructing an addition to his building.
However, he chose not to increase his insurance coverage to keep up with the real value of the property as it is today.

It didn’t matter to him that both his insurance agent and insurance company had done their own risk management assessment and had strongly encouraged him to increase the amounts on his property & casualty policy.

The business owner was confident that he could save himself lots of money by ignoring their advice – because he was optimistic that he had built his building to last.

Enter the unexpected: Somehow an electrical wire in the ceiling of the addition had become frayed.

Maybe it was the work of mice in the attic.
Maybe there was a vibration that had worn through the insulation on the wire.

Whatever the cause, fire broke out in the ceiling of this warehouse-sized building.
Char, soot, and smoke damaged not just the building, but also several of his customers’ cars and all the tools and equipment in the building.

The cost of this commercial fire damage restoration project, for both the building and the contents, is in the hundreds of thousands of dollars.

The business owner has discovered the sad truth that most of it isn’t covered by his insurance policy because he was under-insured.

And now he has to pay out of his own pocket for the cost of fire damage restoration to his building.

This business owner’s inherent optimism allowed him to assume a risk for many years that now he can’t afford.

The moral of this story is, don’t be like him.

A small dose of pessimism can be a good thing.

This business owner is now saying “If only I had listened to my agent’s suggestion and followed the insurer’s risk management plan.

Talk to your agent. Don’t wait until your business needs commercial property damage restoration services to find out you don’t have the coverage you need.