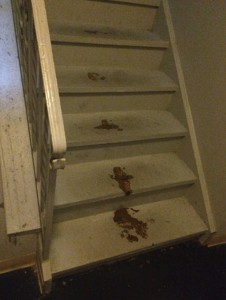 We have handled all sorts of Biohazard cleanup jobs during our tenure in the Greater Philadelphia area. The term “biohazard” refers to biological substances that pose a threat to the health of humans and pets.

This can include medical waste or samples of a microorganism, a virus or a toxin generated from a biological source (like mycotoxins from mold) that can affect human health.

Usually our work doing biohazard clean up comes from an unattended death, sometimes a suicide, many times from a sewage back up, and of course toxic mold remediation.

But this time, it was something completely different . . .

In this story, a local property manager for a condominium in a Southern, NJ town called us in a panic.

It seems someone left excrement in one of the back stairwells of the condominium – and then someone else tracked the mess up the stairs!

The smell and the mess were truly disgusting . . . but, the property manager was more concerned about the health risks the mess represented to the other residents in the condo.

The property manager wasn’t sure what the source of the excrement was – human or pet – until a short time later when she was able to review the footage from the security cameras. As the story unfolded on the security cameras, it appeared that someone in the condo had ordered food to be delivered. . . 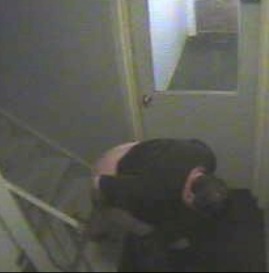 . . . And, the delivery person delivered more than the meal!

Obviously, he either couldn’t or wouldn’t take the time to find a bathroom close by.

So, he improvised and “dropped trow” right on the stairs. 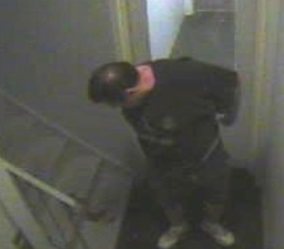 Now the property manager had to find someone to clean up the mess – fast!

The property manager’s panic was warranted: there are over 100 trillion different types of bacteria present in the human fecal material. Who knows how many infectious diseases could be spread by this man’s thoughtless act?

And because the mess had already been tracked by another resident, there was no telling how far the spread of possible infection might be. 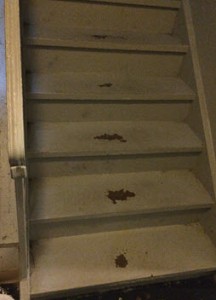 The property manager called us in to mitigate the damage by cleaning and sanitizing to remove the odor and prevent the risk of possible infection to the residents.

Now cleaned and sanitized, this property manager has no worries this night about the health and safety of the residents in this condominium.

Unfortunately, even though the excrement was only on the stairs for a few hours before removal, it actually dissolved the paint on the stairs!

So the damage from the incident is a little more extensive than just a regular clean up and will require painting to completely restore the property.