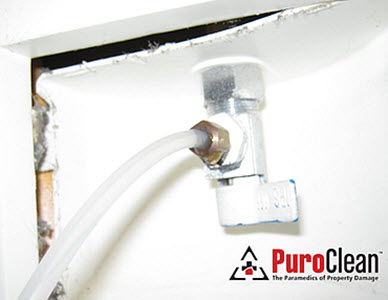 Don’t let this happen to you! Here’s one smart tip for all homeowners: Avoid costly water damage to your home. Check behind your refrigerator right now. Replace old plastic tubing with copper to avoid a burst ice maker supply line.

Everyday I express gratitude for the hands and minds that invented indoor plumbing . . . and water heaters! Comfort, convenience, and cleanliness – brilliance in a package just behind the walls. Can you imagine what it used to be like having to lift, carry and tote water for basic uses like drinking, cooking, and cleaning? Civilization took a giant leap forward when indoor plumbing became standard for all homes. . . 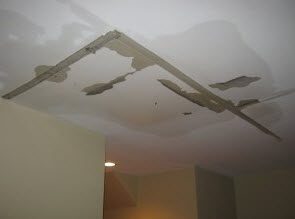 Look out below! Water damaged ceiling in this finished Philadelphia basement 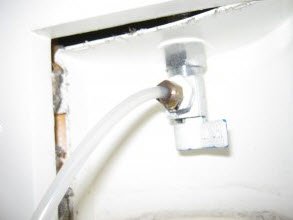 The cause of all the damage downstairs is the ice maker supply line in the kitchen – that burst! 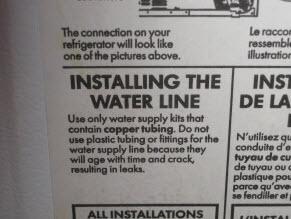 Like my Daddy always said “When all else fails, read the instructions!”Look closely. The installation instructions clearly state NOT to use plastic hose and to use copper line instead. 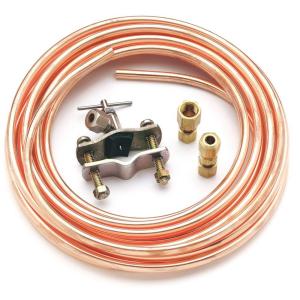 But, sometimes that indoor plumbing can cause problems when water goes where it’s not supposed to be.
There are situations of age that can cause these types of problems. But sometimes, it’s just human error.

In this story, a Philadelphia homeowner was at work when the ice maker supply line on his refrigerator burst.

And, like most of us he didn’t have a clue there was anything wrong until he got home from work and his kids went down to the basement after dinner to play.

“Daddy, the rug is all squishy” his daughter called up the stairs. So the homeowner went to investigate.
Water was pouring down from the ceiling and he didn’t know what to do.

Lucky for him, he knew who to call! We were there in 25 minutes and were able to find the source of the problem.

What’s interesting about this story is that the water damage should never have happened!

The burst ice maker supply line was cheap plastic. It was installed when the refrigerator was delivered to the home – 2 years ago!

The homeowner was lucky the flood hadn’t happened before this!

Yes, the water loss was covered by the man’s homeowners insurance. And, the insurance company was able to subrogate the loss back to – you guessed it! – the company that delivered and installed the appliance incorrectly.

But the burst ice maker supply line could have been avoided.

So here’s one smart tip tip to avoid costly water damage to your home: look behind your refrigerator tonight and make sure your ice maker supply line is copper!

If it isn’t, Home Depot, Lowes, and your friendly neighborhood hardware store all have copper line kits that are easy to install. The kits are fairly inexpensive – and a heck of a lot cheaper than cleaning up and repairing the water damage from a plastic burst ice maker supply line!

But, if you do have this unfortunate experience, please remember our name and number:
PuroClean Emergency Recovery Services   877-750-7876

We are at your service 24 hours a day, 7 days a week – for all your water damage restoration needs in Philadelphia, Cherry Hill, and the surrounding area including burst ice maker supply lines!